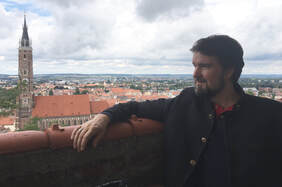 Kalle Kanttila, Artist Manager / CEO
Kalle Kanttila is the founder and director of IOA Management. International Opera Artists was established in 2012 and is an agency for opera singers and conductors. It is based in Munich (Germany) & Helsinki (Finland) and provides worldwide services in the field of opera. IOA has rapidly become one of the largest and most significant opera agencies in Europe and it marks itself off from typical European opera agencies thanks to its strong presence also in the USA.

Kalle Kanttila was born in Oulu, Finland. He began his music studies at the Helsinki Conservatory of Music and furthered them at the Zürich Conservatory and the Music Department of University Karlsruhe, Germany.

In current season (2020) Kalle Kanttila has been invited to give master classes in Bucharest, San Francisco, Beijing Central Conservatory, Chicago Summer Opera, Conservatory of Santa Cecilia in Rome  among others, and of course, at our own Academy (Bavarian Opera Academy), where we will expect guests from many world class theaters, like the Bavarian State Opera Munich, London Covent Garden, Finnish National Opera, Opera Graz and Wiener Staatsoper, just to name of few.

Furthermore, Mr. Kanttila is a much sought-after lecturer at the Sibelius Academy in Helsinki and at many master-classes and seminars in Germany and abroad.
​

Monika Hauswalter, Artist Consultant/ Singing Teacher
Monika Hauswalter, originally from Estonia, is a highly appreciated German voice teacher who has been working as a voice teacher/opera coach at several opera houses and music festivals in Germany & abroad, such as the Finnish National Opera, the Estonian National Opera, the Croatian National Opera in Rijeka and the Immling Opera Festival in Germany, among others. In addition to her activity at the opera houses she has been appointed singing instructor at the Music department of Metropolia University of Applied Sciencesin Helsinki from 2008 until 2018 and from 2017 onwards as a singing teacher & head of education at the Bavarian Opera Academy.

Ms. Hauswalter has made herself a name as a "fixer of voices" and her profound and broad knowledge of anatomy and voice physiology makes her a perfect teacher for singers who are in the middle of their international career, as well as for singers who have some technical issues. Her students are singing at many major opera houses including the Finnish National Opera, Deutsche Oper Berlin, Deutsche Oper am Rhein Düsseldorf, Komische Oper Berlin, Savonlinna Opera Festival, Opera Bremen, Opera Leipzig, State Opera Nürnberg, State Opera Wiesbaden, State Opera Mainz, State Opera Darmstadt, Royal Opera Copenhagen, Opera Brussels and Opera Lisbon, to name a few.

Monika Hauswalter completed her studies as an opera singer at five different music universities: Tallinn, Helsinki, Bern/Biel, Zürich and Karlsruhe and, in addition to her diploma as an opera singer, she also obtained a degree as a singing pedagogue.

Since 2013, Monika Hauswalter has also been working as an Artist Consultant at IOA Management, which is one of the most important opera agencies in Europe.