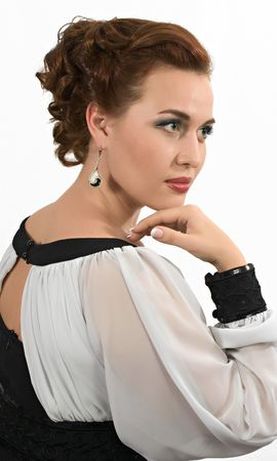 Elena Stikhina, Soprano
In the past years Elena Stikhina has become widely known through her various award-winning performances. She is the winner of the renowned Competizione dell'opera (Linz, 2014) and at Placido Domingos Operalia she was voted by the audience as the "Best Singer". At Operalia she was also awarded with the "Culturarte" prize in 2016.

She is a highly requested soloist on international opera and concert stages; she has charmed at Brucknerhaus Linz, at the Beethoven Festival Bonn and at Tonhalle Zurich. Since 2014 she has been an ensemble member of the State Primorsky Opera in Vladivostok where she has performed the roles of Micaëla (Carmen), Nedda (I Pagliacci), Violetta (La Traviata) as well as the title role in Tosca, to name a few.

Her German opera debut took place at the Opernfestspielen at Gut Immling where she sang the role of Tosca in the season 2014/2015. In the following fall she took the stage of Landestheater Salzburg as Micaëla (Carmen). In the season of 2015/2016 Stikhina was heard as Maliella (I gioielli della Madonna by Wolf-Ferrari) at Theater Freiburg as well as Tosca at Theater Erfurt.