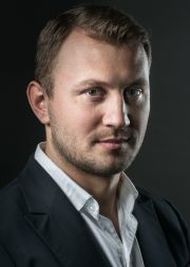 The Moldovian baritone received his vocal training in his home country. He has been rewarded with numerous awards: at the Hariclae-Darclée Competition in 2012, at the Maria Biesu Competition in 2013 and in 2014 at Grand Prix de l’Opéra in Bucharest.
His repertoire includes such parts as Robert in Tchaikovsky's Iolanta, Escamillo (Carmen) and Figaro (Il barbiere di Siviglia).

Since 2015/16 he is an ensemble member of the International Opera Studio Zürich where he has been heard as Usciere (Rigoletto) and Schaunard (La bohème).